Whole30 is an invitation to 30 days of self-care, community & building healthy habits in an effort to change your relationship with food. The program helps individuals eliminate cravings, improve sleep and energy, and understand the way food affects the body. The end goal? Finding food freedom, the place where you have all the tools to create the perfect diet for YOU.

The easy answer? Real food. But at its heart, the Whole30 is an elimination diet. The goal is to eliminate foods that are problematic to the body to see their effects. Here’s a guide to eating Whole30:

The easy answer? Real food. But at its heart, the Whole30 is an elimination diet. The goal is to eliminate foods that are problematic to the body to see their effects. Here’s a guide to eating Whole30: 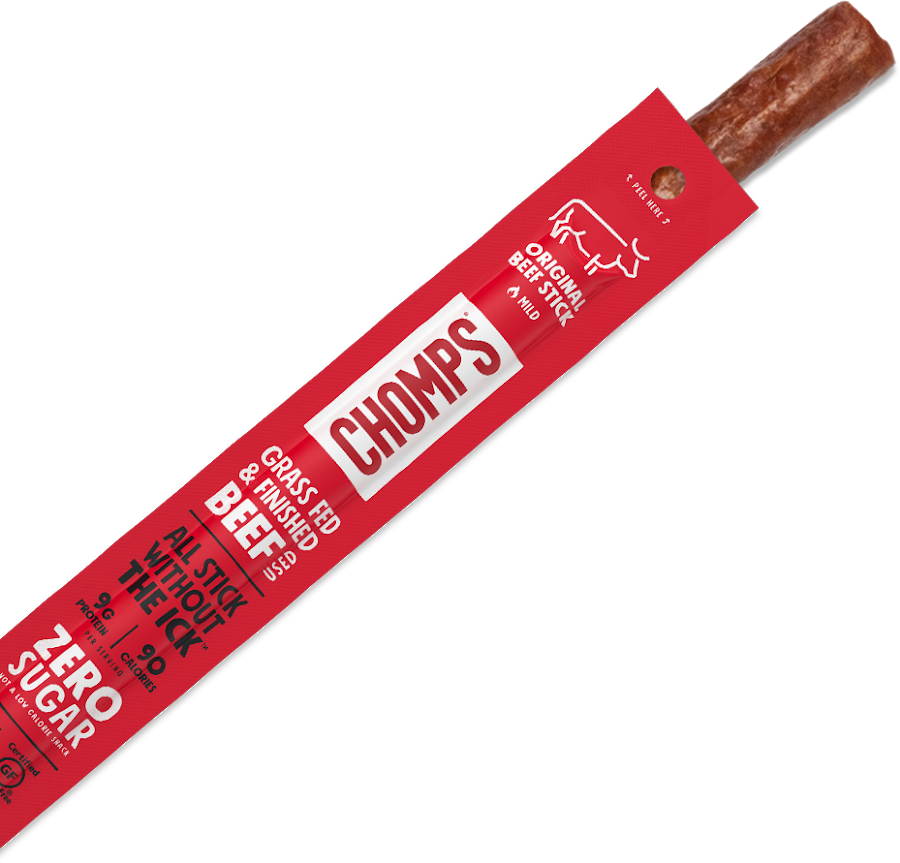 Is Jerky allowed on Whole30?

Meat sticks are the perfect “mini-meal” when you’re finishing up a workout and your next meal is far away, or when you’re running from carpool to soccer practice and need a quick fix on the go. Traditional meat snacks, like gas station jerky is far from Whole30 compliant, but with Chomps dairy free and sugar free snacks, you’re still able to consume Beef Jerky on Whole30.

On-the-Go Emergency Snack: Stuck in the carpool line? Need a snack for the 3pm slump at work? Chomps Whole30 beef jerky fills the silence in all your emergency moments.

Leave out the guilt. We opted for celery juice to keep our products fresh and shelf-stable.

Leave out the guilt. We opted for celery juice to keep our products fresh and shelf-stable.

Pork? Nope. Unnecessary ingredients? Nope. We leave the fillers out.

Packed with protein to help fuel you through the day.

In 2013, Chomps Co-Founder and CEO, Pete Maldonado listened to a talk given by up and comer, Melissa Urban. He had been active in the CrossFit space, selling Chomps meat snacks to athletes and Paleo dieters and had started hearing whispers about Whole30.

After listening to Melissa’s talk, he knew he had stumbled across something special. He realized right away that everything Melissa and the Whole30 team stood for aligned with the Chomps brand. And just like that, Chomps became the first Whole30 Approved meat stick.

I found CHOMPS while trying the Whole30. What a great ﬁnd! They taste great and do the job AND they aren't loaded with anything bad...l love it!

Very convenient for on the go! And Whole30 approved. All are good, but our favorite is the venison! Less spicy than the others.

Perfect snack to grab and go!

I'm in love with the Turkey Chomps - especially when on Whole30! They are the perfect snack to grab or throw in my purse for when I get extra hungry!

These saved me on my first whole30 nutrition challenge. Satisfying and delicious! Now they are a staple in my household.

OUR Relationship with Melissa

When Pete & Melissa met, Pete was thrilled to have found another individual and another brand that mirrored the Chomps values of transparency, resourcefulness and empowerment. Melissa and the Whole30 Team accomplish the hard job of educating consumers on the best ways to fuel their lives, and Chomps supports the Whole30 mission by never cutting corners and providing Whole30 approved jerky that consumers can enjoy on the go.

Through the Chomps affiliate program, the Chomps team assists Whole30 coaches by providing Whole30 jerky and sponsoring Coach led events and programs. Chomps was a key partner at the Whole30 Summit in 2019 as the only Whole30 compliant jerky available for attendees to enjoy in between sessions. The Whole30 community is so valuable to the Chomps team because they help carry out the Chomps mission of inspiring a change in food through education.